The Arizal on the Root Souls of Our Leaders: Aharon 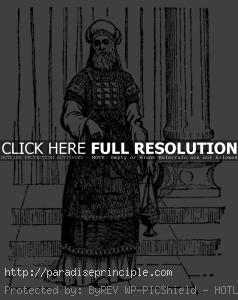 This is the continuation of the Patriarchal Sephirotic series, dealing with the root souls of our seven shepherds, and this one deals with Aharon, or Aaron Ha Cohen.

Aaron was the High Priest, the name he was known by. He is considered to be the Sephira of Hod, the counterpart of Netzach, which means he’s a counterpart of Moses. Hod and Netzach are like two partners, like Ying and Yang, balancing each other out.  So that’s how the two brothers, Moses and Aaron balanced each other out, in terms of their influence in the world.

Because Aaron was Hod, and Hod is the enabler, empowering other people to do things, he was tested regarding the weakness of enabling at the episode of the Golden Calf. Although all his intentions were pure, he allowed the erection of the Golden Calf while the people were waiting for Moses to return.  This incident affected history, and Aaron’s life as well.

One of the immediate effects on Aaron was a decree that two of his four sons would be killed by “strange fire,” during the erection of the Tabernacle for the first time. Two of his younger sons were consumed by fire and killed at that time.

There are two other Sephirot connected with the High Priest. One is Chochma (Wisdom) and the other is Chesed (Lovingkindness), both of which function specifically in the healing role, what the High Priest does in affecting Kapparah, or the different healings the Cohen does for the purpose of atonement.

Aaron was the most mourned-after leader of Israel. For thirty solid days, in a very heartfelt way the people mourned the loss of Aaron. He was buried in the desert near Israel called Hor Hahar, and he was mourned that way because his role was as peacemaker, and he was constantly seeking the good of all the people.

He had the reputation of going to both sides in any antagonistic situation and make each side understand how the other side loves them. That’s how Aaron achieved peace in many situations and came to be beloved as a leader.

In his merit, we know, there were the clouds of glory that protected the Jewish People from their enemies. In Kabbalah we understand there were clouds of “surrounding light,” which protected the Israelites in the desert from foreign energies as well as people. These clouds are one of the expressions of the holiday of Sukkot, in which we dwell for seven days each fall, reminiscent of those clouds of glory.

Now I’m going to relate historical reincarnations of Aaron, so try to follow along:

First, between the brothers Cain and Able, Aaron came from the brother Able, as did his brother, Moses. That was his first reincarnation.

The second one was Abraham’s brother, Haran, a name that shares the same Hebrew letters as the name Aaron. Haran was afraid to jump into the fire in order to sanctify G-d’s name, for the purpose of pushing off idol worship. In other words, he didn’t have the right intentions and so he failed that particular test. That was his reincarnation as Abraham’s brother, and his tendencies would show up in future reincarnations, as we’ll see.

The third one was the two sons of Aaron, Nadav and Avihu, because they were a type of reincarnation of Aaron. I as mentioned, they are the ones who died in the “strange fire.”

The next person reincarnated in this line was a person called Yaadetz, whose name, the inner, core part of his name means “sadness,” from the word atzue in Hebrew. He was a carrie of the impression of the sadness of the two sons of Aaron who passed away, in their previous reincarnation.

The next person was named Tola Ben Puah who was reminiscent of a worm, whose power resides in its mouth. That’s what “tola” means in Hebrew, and he came to fix the previous incarnation of overly-expressed vows, made by mouth.

The next reincarnation was Shmuel Ha Navi, or Samuel the prophet.  He was a traveling judge, and he came to fix Tola Ben Puah’s lack of traveling around Israel to judge and fix the people. So, Samuel came to fix that lack and accomplish that task.

The next reincarnation was Uriah Ha Chiti, who was originally the husband of King David’s main wife, Batsheva. King David sent Uriah into battle, where he was killed. David acquired divorces from all his soldiers before they were sent into battle, so he was able to marry Batsheva after Uriah died.

Uriah’s death was partly atonement for Aaron’s unwillingness to die for the sin of the Golden Calf.

Next is Uriah Ha Cohen, reincarnation of Aaron, and of his sons, all three of them in the same reincarnation. He was killed again in this reincarnation by a person named Yehoyakaim, once again an atonement for Aaron’s failure to give up his life for the sin of the Golden Calf.

And finally, Zechariah, the prophet was a reincarnation of Aaron. The last two reincarnations that came at the same time revealed the lowest level, the Nefesh level of Zechariah, whose name was Rabbi Eliyahu Ei Didosh, who authored a famous book called Raishit Chochma, and he came back as the nefesh of Zechariah.

And the one who came back as the Ruach, the next highest soul level of Zechariah, was named the Ramak, so that’s why these two were very good friends. They were two parts of the soul level of the same person, reincarnated at the same time.

This entry was posted by yitzchak on May 23, 2016 at 11:20 AM, and is filed under Meditations, The Arizal. Follow any responses to this post through RSS 2.0. Both comments and pings are currently closed.