« The Arizal On The Root Souls of Our Leaders: Joseph
Kabbalah 101: Gilgulei Yisrael (Reincarnation) »

The Arizal On The Root Souls of Our Leaders: King David 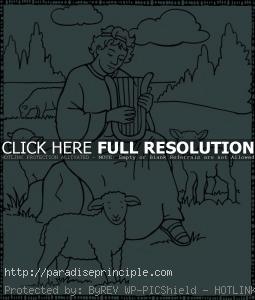 This is the seventh and the last post in this series of soul information of the seven Patriarchs or shepherds of the nation of Israel.

This one is about King David, the seventh of the seven Patriarchs, representing the Sephira of Malchut. Being the carrier, or merkavah of the Malchut in the world he was the one who had nothing of his own, but only had what he received from those who went before him, and from above.

In other words, as Malchut, David received all the other Sephirot, all together. And that’s how he perceived G-d, with the spectacle of all the other Sephirot together, while he was the lowest and also the highest at the same time, the most expansive receiver of G-d. All this contributed to King David being the paradigm of Moshiach, or Messiah.

It was his complete receptivity that led to King David being called, “a friend to G-d.” That’s a quote from the Bible as well. He was a friend to G-d because he was so receptive of G-d.

At birth, David was meant to be stillborn, but the other Patriarchs, including Adam, dedicated years of their lives to his life, so that he could live his whole seventy years. Because he was given life, instead of passing away in the womb, he had to be careful with anything to do with death.

We know from our sages that sleep is 1/60th of death, so David was extremely careful about not sleeping, as much as humanly possible. He never slept more than 60 winks, as they say. And that’s why he was the one awake every night at midnight, and writing his incredible psalms of the Holy Spirit, and singing them, and learning Torah.

King David was an exception, as far as souls are concerned, and it was testified by Abigail, one of David’s wives, that he would not have to reincarnate again. He was able to fix it all up in one lifetime, which was truly awesome, coming straight from the other side made him more likely to be a serial killer than to be a Messiah.

It’s almost incomprehensible to imagine how he could do it all in one lifetime. David went from zero to 120 in one lifetime. And it was said, as one song puts it, “David of Israel, he lived forever.” There is a mystical understanding that King David lives forever; he never dies. He died physically, but there is something about his essence that does not die.

King David came from the Messianic line, going back to Ruth and Boaz and other characters in Tanach who, in their lifetime, experienced not only every good thing, but also every depravity. This was a G-dly, intentional providence, because Messiah will stand up in his time and say, “I’ve been there and done that. You have nothing to hide from me. I came here to fix up the world, and there’s nobody outside of my scope, of what I’ve experienced in life.”

King David was a warrior, and that precluded him from building the first Holy Temple, because of his activities in battle. Building of the Holy Temple was a task given to his chosen son, King Soloman. All the wars in which David fought throughout his lifetime were, on a spiritual level, to ride our people of the scourge of the Sitra Achra, the other side. And since David came from this other side before incarnating in his life as King David, he came with some questionable personality traits. If you’d take a profile on him you might see he was right up there with some of the greatest criminals of all time. But he worked on himself so much and so hard that he completed himself. It’s also attributed to his redheadedness, because red is the trait of Gevurot, the harshness of reality.

But he was also called the Man of Beautiful Eyes, which was his connection to Malchut, but also to Yesod, the second to last Sephira, which is Beauty. That is one aspect of King David’s beautiful eyes.

He was connected at all times, especially at the end of his days, to Torah. As long as a person is connected to Torah, death cannot snatch him away. So, King David sort of cheated the Angel of Death until it made some kind of ruckus outside, and David became distracted and was snatched away from this life.

He sent the snake out to be killed in war, in a kosher way, although he did do teshuva for that his whole life, and he also took back his rightful soulmate, Batsheva, who gave birth to King Soloman.

King David is called the Sweet Singer of Israel. The power of Ruach Ha Kodesh, the Holy Spirit is planted into his psalms. They are the words of our mouths and the meditations of our hearts, ever since David wrote them down. Eighty percent of all our prayers are his words, and we find ourselves using them whenever we are in need, because his words become the heart song of our words. So, he was the Heart Singer of Israel as well.

This entry was posted by yitzchak on June 6, 2016 at 5:15 PM, and is filed under Meditations, The Arizal. Follow any responses to this post through RSS 2.0. Both comments and pings are currently closed.