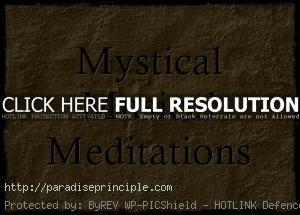 Since it’s Israel’s Independence Day this week, also known as Remembrance Day, my MMM will be about the Land. The land of Israel is called, “the Land,” because it is THE, unique land, a microcosmic representation of all the lands in the world.

I want to talk about the Land. , it’s“above-nature” aspect , and how we have to synchronize ourselves to that aspect when we live in Israel.There are a lot of above-nature aspects in the Land, which you don’t find in other places, other than the Land of Israel.

1) Our Sages teach us from a verse in Torah that G-d has his eyes on every person in every land. But here, in Israel, it’s different. In other lands, there’s more of an indirect connection with G-d, but in the Land it’s more direct. We can feel G-d watching us.

2) The Land is considered to be the Sephirah of Malchut, which means it has nothing of its own. It only has what G-d gives to it, and to its people. The Land is, therefore, extremely humble, subdued and lowly. It is in a position to receive. To live properly in the Land, we, the residents, must have the same qualities, to match up with it.

3) It’s said that Torah, the Divine wisdom of the Land, is unlike any other land. I know people who learn Torah outside of the Land, and when they come to the Land, their progress speeds up twenty-fold. There is wisdom in the Land itself. In terms of Kabbalah and in terms of the world, it’s on a higher level.

5) The Land is considered to have a unique persona. Like each human being, the Land has a personality because it’s the place where the Shechinah dwells. And the Land relates to you like another person, like a close relative. You treat the Land right and it will treat you right.

8) The Land is so holy that every new step you take is considered to be a mitzvah. It’s a whole new connection to G-d, only possible in the Land itself.

9) The Land was acquired by the Israelites from the Canaanites. In Hebrew, the root word of Canaan means “submissive.” You need a submissive mindset here, meaning submissive to G-d and to the Land.

10) There’s a direct connection between the physical and the spiritual in the Land. So, the way you act affects what the Land gives back to you. Spiritually, you are adept, humble and holy. The Land will reflect those qualities back to you and double them.

11) There’s a direct connection between the higher worlds and the lower worlds. We feel as though we’re walking in parallel worlds, with G-d’s hand involved in every move we make.

This entry was posted by yitzchak on April 15, 2018 at 8:58 PM, and is filed under Events. Follow any responses to this post through RSS 2.0. Both comments and pings are currently closed.